He is a pioneer in fast fashion. He co-founded Zara parent Industria de Diseno Textil (Inditex) with his ex-wife Rosalia Mera in 1975 who later died. She was born in January 28, 1944, A Coruña, Spain. She had been his childhood friend. At the time of her death, she was the richest woman in Spain and the world’s richest self-made woman. Later, Amancio Ortega married Flora Perez in the year 2001. The couple have maintained their relationship since that year. They have a daughter named Marta.

He left school and moved to A Coruña at the age of 14. His father was a railway worker. Shortly after, he found a job as a shop hand for a local shirtmaker called Gala. In 1972, he founded Confecciones Goa (his initials in reverse), selling quilted bathrobes which Ortega produced using thousands of local women organised into sewing cooperatives.

His company Inditex which as well as Zara also owns the brands Bershka, Pull & Bear, and Massimo Dutti, has quietly become the world’s largest fashion retailer with 6,500 shops in 88 countries and annual sales of more than €18.1 billion. Moreover, Ortega typically earns more than $400 million in dividends a year. He has plowed that money into an ever-expanding real estate portfolio, which includes buildings in Madrid, Barcelona, London, Chicago, Miami and New York.

Ortega keeps a very low profile and is known for his preference for a simple lifestyle. 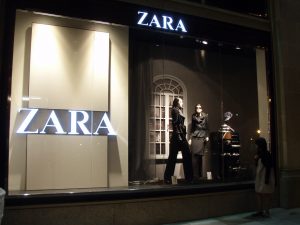 Until 1999, no photograph of Ortega had ever been published. He refuses to wear a tie and typically wears a simple uniform of a blue blazer, white shirt, and gray trousers, none of which are Zara products. The boss eats lunch with his employees in the company cafeteria. He is usually found sharing a table on the factory floor, with some of the designers, fabric experts and buyers. The tycoon reportedly visits the same coffee shop every day in La Coruña.

Every year, along with the Barrie Foundation, Ortega’s foundation sponsors 75 secondary school scholarships to enable students in schools throughout Galicia to spend a year studying in the U.S. In October 2012, the Amancio Ortega Foundation donated $22 million to Caritas, a charitable organization of the Catholic Church, supporting societal development and fostering the traditions of charity and social work. In addition, the foundation also donated $11 million to fund educational programs through the Entreculturas Foundation. Ortega also co-founded the Paideia Galiza Foundation, which donates primarily to the mentally and physically challenged. In March 2017, the Amancio Ortega Foundation pledged to spend $344 million to acquire the latest breast cancer-screening technology for public hospitals across Spain.