With a real time net worth of $79.8 Billion, Jeff Bezos has soared to nearly the top of Forbes’ billionaires ranks. This is  as his online retailer’s stock has climbed, in part due to its booming cloud-computing unit, Amazon Web Services. 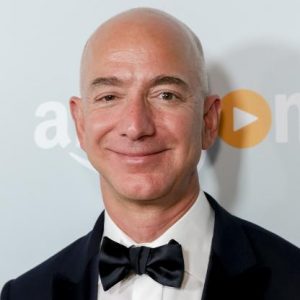 Jeff was born on January 12 1964, as Jeffrey Preston Jorgensen. His stepdad, a cuban immigrant raised him together with his mother. He graduated from princeton University in 1986 with a bachelor of science degree in electrical engineering and computer science. Jeff quit a lucrative New York hedge fund job in 1994 with the simple idea to sell books online. He founded Amazon.com then selling books online from their home garage. Amazon now sells almost everything a customer would need.

Jeff Bezos is currently the third richest man in the world after Bill gates and Warren Buffet.

Apart from Amazon, he has also ventured in other diversified business interests include aerospace and newspaper. He is the founder and manufacturer of Blue Origin (founded in 2000) with test flights to space beginning in 2015.